A classic beauty for the woodland garden. Grown mostly for its clean variegated, soft green foliage which turns yellow in fall. Solomon's Seal is a charming plant for the shade. Standing about 18" tall and arching slightly at the top, the unbranched stems with large, alternate leaves support the dangling white flowers below. On quiet spring evenings, the flowers exude a subtle lily-like fragrance. The stems are beautiful in cut flower arrangements.

The genus Polygonatum, native to Europe, Asia, and North America.

Members of Polygonatum are excellent perennials for the landscape. The genus botanical name (Polygonatum) comes from poly (many) and gonu (knee joints) and refers to the many-jointed rhizome from which the leaves arise. The common name Solomon's Seal has several proposed derivations. The first is that the scar that remains on the rootstock after the leaf stalks die off in the fall resembles the seal impressed on wax on documents in the past. The second source is that John Gerard, the English botanist and herbalist, suggested that the powdered roots were an excellent remedy for broken bones. He also felt the plant had the capacity for "sealing wounds," which was why the perennial received the common name - Solomon's Seal. 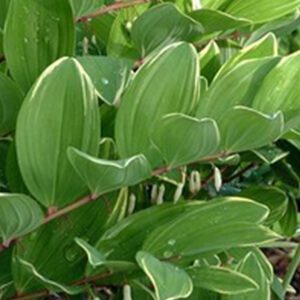