Japanese beetles are an incredibly destructive plant pest found throughout most of the eastern United States, stretching westward toward states along the Mississippi River, including Iowa.

The Japanese beetles can be destructive toward plants in both their adult beetle stage and in their grub larval stage. As adults, they damage plants by feeding on foliage of a multitude of trees, shrubs, fruits, ornamentals, flowers, vines, and vegetables.

Some of the more notable plants they feast on in Iowa are; rose bushes, grape vines, birch and linden trees, and raspberries.

The damage can be identified by skeletonized leaves (eating the area between a leaf's veins) and large holes in leaves. The Japanese beetle grub lives in the soil and causes destructive damage by eating the roots of many plants including turf grasses.

Adult Japanese beetles are most commonly found during the late spring through late summer. While female beetles are feeding, they will periodically leave the plants to lay eggs, usually into the turf. One beetle can lay upwards of 50 eggs a year. These eggs, then hatch into grubs around midsummer, and begin to feed on the roots of turf grasses and other plants.

Before the first frost, the grubs will bury deeper into the soil, and remain inactive throughout the winter months.

In the early spring, the grubs will move closer to the surface of the soil and begin feeding on roots again, until they begin to pupate in late spring. Then, in about two weeks, the pupae become adult beetles and they emerge from the ground and begin consuming plants again. 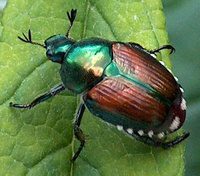